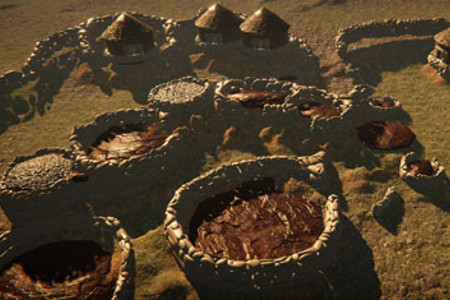 Kweneng is a dense agglomeration of stone-walled structures in the western foothills of the Suikerbosrand massif, some 30 km south of Johannesburg. The hundreds of Molokwane-style homesteads, large livestock enclosures, monumental ash heaps, stone towers, and other impressive architectural features attest to the economic wealth and political importance of this pre-colonial city during its classic phase of occupation. The northern end of the city contains architecture of an older style, while a number of homesteads in the southern sector are built in late pre-colonial styles. It remains to be seen whether parts of Kweneng were still inhabited when the first European settlers reached this area in the mid-1800s. With a complete sequence from formation to collapse, the well-preserved ruins of Kweneng can shed light on the birth of urbanism in more distant times where the evidence might be considerably less intact. This seminar by Prof. Karim Sadr, University of the Witwatersrand, presents details of current research on Kweneng and introduces the settlement pattern and the principal features of this ancient city. Please register